Pinterest is a unique photo and video-sharing platform, in case you were unaware. Instead than merely sharing visuals with their networks, Pinterest allows users to curate personal boards published by other users. Additionally, users can contribute, or "pin," their own graphic content to boards.

Pinterest identifies itself as a "visual discovery engine for discovering ideas such as recipes, home and fashion inspiration, and more." This means that it is a visual search engine in addition to a social platform. Users can share, find, and contribute photographs to collections based on their interests.

Pinterest may be one of the largest social media channels, but its business strategy takes a radically different approach to social media. Pinterest views itself as a discovery service as opposed to a socially-focused platform to engage with individuals and see what's occurring in their life.

Ben Silbermann, Paul Sciarra, and Evan Sharp established Pinterest with the intention of creating a platform that everyone, including non-techies, could use and understand immediately.

Pinterest is distinct from other social networks since it prioritizes sharing what users like, as opposed to providing updates about ourselves.

It is a service that differs from many other online services in that it is centered on the user. It relates to your interests, objectives, and future. It is not as important to keep up with your friends, to follow celebrities, or to read the news. 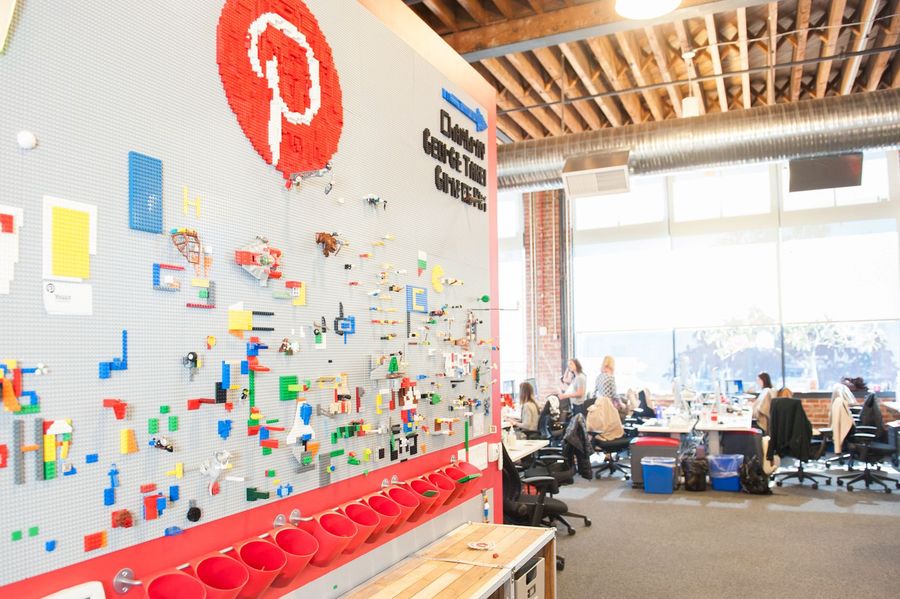 Pinterest's history is intriguing. Here is a brief summary of how the platform was created and where the Pinterest business concept originated.

When Sciarra left his position at a New York venture capital firm in 2006, he created the groundwork for Pinterest. Together with Silberman, a former Google employee, he founded Cold Brew Labs, an app development company.

They devised a shopping comparison engine dubbed 'Tote' that allowed customers to peruse apparel from 30 or so various merchants, mark them as favorites, and locate discounts.

Despite the fact that Cold Brew was able to secure funding for 'Tote,' the software failed for two reasons. Initially, individuals did not use smartphone apps for shopping. Second, Apple's App Store was too sluggish to accommodate the numerous version changes that their company generated.

The only positive outcome of 'Tote' was that Silbermann and Sciarra recognized how popular their 'favorites' feature was among their clientele. They observed that their users were gathering and sending themselves photographs of products they loved. This is where the concept for 'Pinterest' began to take shape. 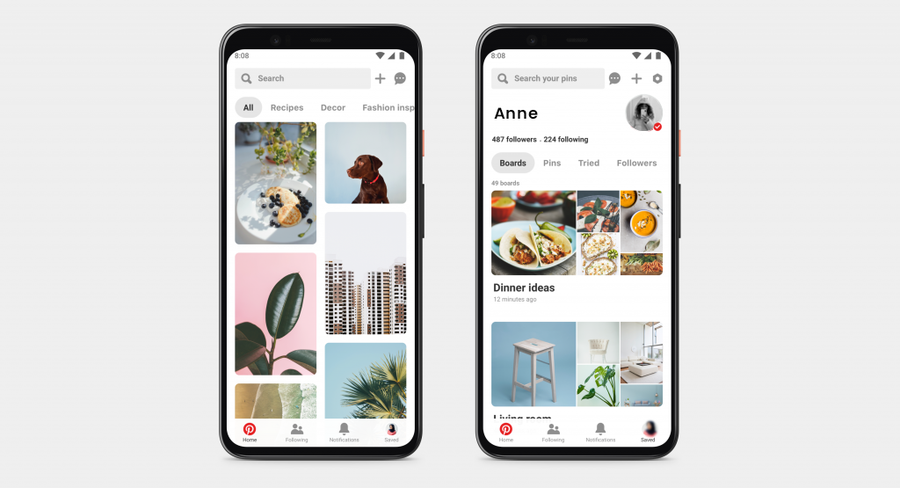 Evan Sharp, a product designer for Facebook, joined the two as they immediately began constructing a prototype. Sharp is credited with coding the majority of the website and creating the visual language for Pinterest that we all use today.

They then began pitching their produced prototype to venture investors in order to secure money for their "visual collection" application. And although three would develop the software, Silberman's girlfriend came up with the name, which she shared during the 2009 Thanksgiving holiday.

With its first group of beta testers, Pinterest targeted American housewives, providing them with a way to pass the time.

Therefore, while networks such as Facebook, Twitter, and Instagram promoted themselves with aggressive marketing strategies and celebrity ambassadors, Pinterest targeted a demographic that other platforms typically neglect. It was a potentially dangerous approach, but it ultimately paid off.

When Pinterest began formally in 2010, the social media ecosystem was undergoing a profound transformation. Facebook was Pinterest's direct competitor; at the time of its inception, Facebook had more than 300 million users. Even Twitter at the time had approximately 20 million members.

The first few months for Pinterest were difficult. The application was in beta testing with invite-only beta users. This normally generates a great deal of interest, but Pinterest was unable to capitalize on the concept. After nine months in open beta, Pinterest had fewer than 10,000 active members.

Silbermann personally contacted nearly half of these users. He offered them his cell phone number and invited them to contact him at any time. Silbermann apparently maintained in contact with many of these 5,000 users for a number of years to assist in the development of Pinterest's customer base. 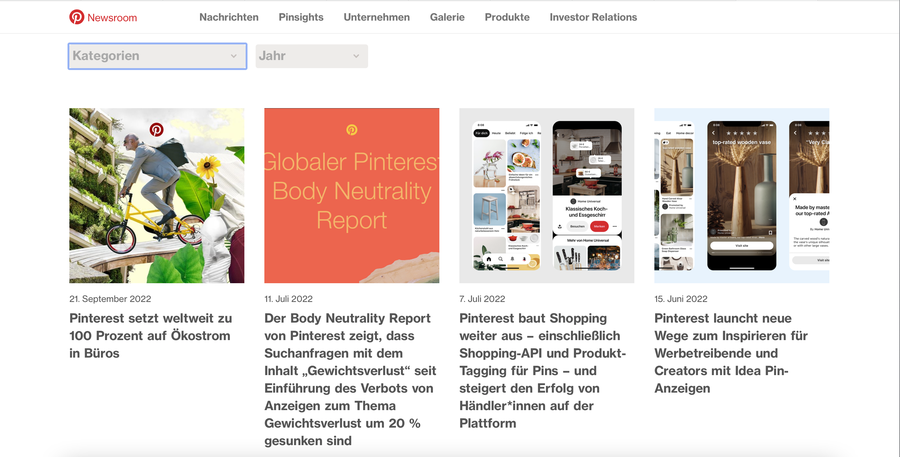 The increase of Pinterest's popularity

Silbermann's personal relationship with users was sufficient to convince investors of the platform's potential. Kevin Hartz, CEO of Eventbrite, joined the round as an angel investor. Hartz is a PayPal veteran, and his connection with Pinterest exposed it to one of the most powerful investor networks in Silicon Valley.

However, the firm's big break did not occur until March 2011, when the Pinterest App was released on the Apple app store, allowing the company to surpass 1 million users by July of that year.

A few months later, TIME magazine included Pinterest in a list of the '50 top websites.' This was the subsequent breakthrough.

By the end of the year, Pinterest had become one of the world's largest social networking networks, attracting more than 11 million unique visitors per week, prompting TechCrunch to name it the Best New Startup of 2011. By August 2012, more than 20 million users were daily pinning items and creating boards on Pinterest.

Pinterest has undergone a growth since 2013. By the spring of 2014, Pinterest users had repinned more than 30 billion images, with nearly half of those repins occurring within the last six months. Pinterest began using user data to target advertisements based on user likes and searches, as well as other demographics. This enabled them further develop their product.

Pinterest surpassed 100 million users in 2015 and has continued to expand steadily while keeping a dedicated fan base. The epidemic propelled its expansion in 2020, adding 100 million additional users for a total of 454 million in the third quarter of 2021. This made it superior to platforms like Reddit, Twitter, and Quora.

In 2021, the photo-sharing platform Pinterest generated approximately 2.58 billion dollars in revenue. In comparison to the previous year, the company's revenue increased by around 52 percent.

Regarding its business model, Pinterest primarily generates revenue from advertisements and sponsored pins, in which users pay to have their pins or boards shown on the app. Additionally, Pinterest returned to its roots by allowing users to purchase specific things directly from the app.

Even though Pinterest is such a popular site, its current economic model is still not profitable.

In 2020, Pinterest's net loss was $128 million, compared to over $1.4 billion in 2019. For investors, this can be a favorable indicator of the company's path to profitability.

Importantly, Pinterest's Q3 revenue increased by 43% year-over-year to $633 million, with a net profitability of $94 million, compared to a net loss of $94 million in the prior year. This is a result of growing demand from large retail advertisers and expansion of its worldwide operations.

With such consistent growth rates, why is Pinterest unable to produce a substantial profit from its millions of users? The primary cause is the absence of a monetization strategy in Pinterest's business model.

This significantly disadvantages Pinterest in comparison to other social media platforms, all of which generate revenue in some way.

Although promoted pins and shoppable pins are revenue producers for Pinterest's business model, the company did not maximize their potential. This is because they were released too late and too slowly, forcing users to abandon the platform in favor of alternatives.

Many advertisers were reluctant to reallocate their money from Facebook's established success to Pinterest's cheaper, but largely unproven Promoted Pins. Many businesses were cautious to adopt Pinterest for digital advertising compared to other social networking sites that emphasized advertising earlier.

A last issue with the Pinterest business model is the company's outdated technology. While Pinterest announced video support and developed a native video player in 2016, Facebook had previously been using video ads for two years and was experiencing robust revenue growth.

Do you want to get more information about the Pinterest business model?