An Overview of the Business Model of the Furniture Giant IKEA

IKEA was founded in 1943 by Ingvar Kamprad primarily as a mail-order sales business. Some years later the company was dedicated to selling furniture and started its expansion slowly. The company pioneered flat pack design furniture at affordable prices for the general public leading IKEA to a great success.

The company follows a low-cost leadership strategy determining the price as the base for product development. As a result, products are produced, packed and transported in the most efficient way. The design is based upon the knowledge about life at home and limited space providing inspiration how to arrange furniture and home accessoires in certain living areas. With regard to its product strategy, IKEA offers a wide range of products according to customers’ needs, available for all members of society. Different markets require product adaptation to fulfil the customers’ needs however the concept of flat packing is a basic feature of the company.

Moreover, IKEA strives to create a special environment for shopping and provides food courts and play areas for kids thus addressing families with children in a special way. All customer segments can enjoy additional services such as delivery, assembly or lending such that acquired products can be payed in instalments. Additionally, IKEA is engaged in several social initiatives.

The SWOT Analysis of IKEA is about the strengths, weaknesses, opportunities and threats of the companies business model.

A SWOT Analysis of the Furniture Giant: What are the Strengths of IKEA

This canvas shows a detailed explanation of how the business model of Ikea is structured. 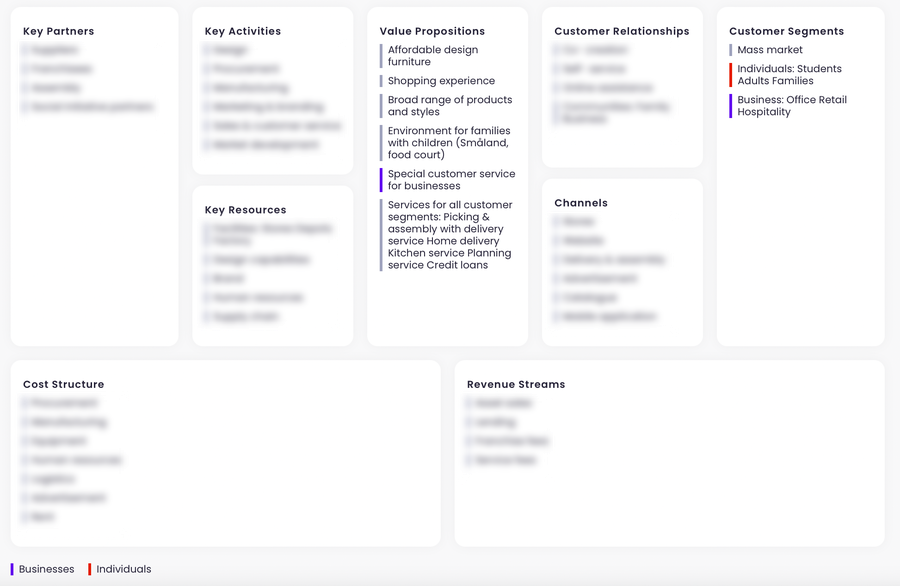 2 of 11 Business Model Patterns behind IKEA

The Business Model Ideas Patterns are a collection of mechanics, themes and strategies used to delineate business model building blocks. Use them as inspiration and blueprints for designing your business models.
The best way to do this, is to look at the design theme and ask yourself, what would this mean for our business?
For each design theme we provide a short explanation, some key questions you can ask yourself and links to analyzes at Business Model Ideas, illustrating the design theme in practice.

Ikea clearly applies the do-it-yourself business model because they sell their products in kit form and the customer has to assemble the purchased product himself or additionally book an external service from Ikea to assemble the furniture.

Ike's shops are equipped with many showrooms where the different products are presented very nicely and neatly. It should be an experience to visit an Ikea shop. A family can do everything here. From playgrounds for children to family-friendly restaurants, everything is here.

How Does IKEA Make Money?

According to IKEA's about page, the company currently operates 466 stores in 63 markets across the globe. IKEA also had approximately 775 million IKEA.com visitors in 2021.

How does IKEA profit from all these stores and website visitors?

IKEA generates the majority of its revenue through wholesale sales to IKEA franchisees. In fact, according to IKEA's financial results for fiscal year 2021, $25.46 billion or 94.8% of IKEA's total revenue in 2021 was generated from the sale of goods.

How does IKEA make money in such a manner? Franchisees of IKEA must purchase their store's inventory directly from IKEA's product suppliers. Which results in direct business for IKEA.

IKEA also generates revenue through franchise fees. Which contributed an additional $1.33 billion to IKEA's total revenue in 2021. IKEA currently operates 466 stores, all of which are franchised. This implies that IKEA collects franchise fees from each of its 466 stores.

According to IKEA's financial results for FY21, other revenue is generated by the sale of the IKEA catalog (final edition) and other marketing materials created for IKEA franchisees.

The strategy IKEA is pursuing is to provide a range of home furnishing products that are affordable to the many people, not just the few. Therefore, the company focuses on combining function, quality, design and value, also involving the concept of sustainability. The company assigns its customers an important role integrating them into its created democratic design process. Both parties are assumed to take part in the process in order to save money. Customers get involved in activities such as assembling the flat-pack products or providing feedback. With its philosophy that higher volumes result in lower costs and consequently in lower prices, the company continues its expansion across the globe.

Could you involve your customers in any part of your business’ value chain?

2. Influencing the understanding of consumer products.

With its low-cost products, IKEA changed the understanding people had about furniture. If earlier buying new furniture was regarded an investment, it became a nondurable good which similar to cloths could be changed again and again. Consumers do not feel that much attached to their low-priced products as compared to more expensive pieces.

Does your product or service have the potential to transform attitudes of people? 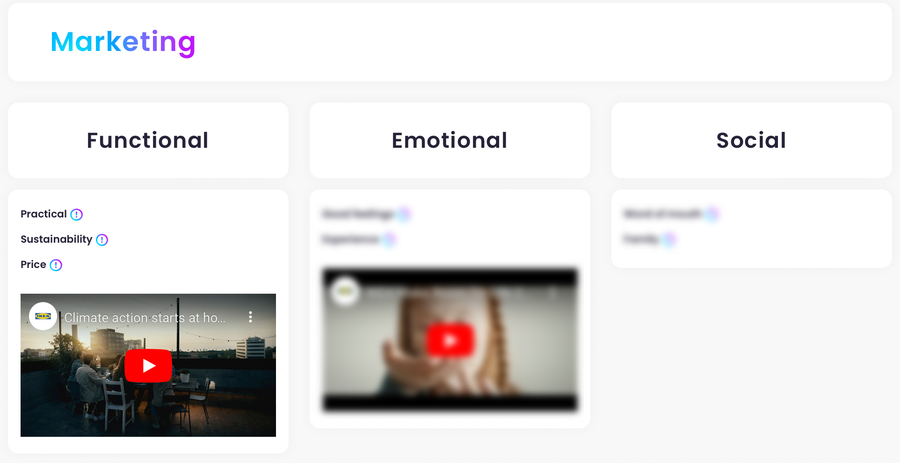 They advertise furniture that is easy and quick for anyone to assemble without a lot of tools.

Ikea advertises a lot about sustainability and now presents itself as a very sustainable company.

In addition, Ikea has always advertised low prices and furniture that everyone can afford.

You want to get more information about the IKEA business model? Subscribe for Premium and get access to 150+ analysis!